Exactly two weeks after arriving in Newcastle, I found myself at the Newcastle Interchange Station, getting on the same train but heading in the opposite direction. It’s strange how quickly this past week came and went, but I guess time flies when you’re having fun.

Coming off of a long work week, all of us in the volunteer house were excited for a weekend to relax and explore. We took a surfing lesson, and although we didn’t have the greatest instruction or surfing conditions, it was very enjoyable hanging out in the water for a couple of hours. I also spent some time walking around some parts of Newcastle I had yet to see, such as the wharf and Hunter St. This area is the center of the city featuring hip boutique shops, modern dining, and historical buildings. Since Newcastle is a very important coal mining center, the wharf and harbor continue to function as a busy port with ginormous coal tankers coming in and out of the city around the clock. It was a pretty entertaining afternoon watching these massive ships pass by.

We also spent a day visiting one of Newcastle’s nearby neighbors, Nelson Bay, a town just an hour and a half north in Port Stephens. We hopped on a very convenient public bus which dropped us off a block away from the Main Street and began to walk around. While Nelson Bay’s population tops out at just under 6,000, the area brings in a lot of tourists thanks to its beautiful beaches, marine life, and laid back attitude. It wasn’t very hard to understand why it is so popular as the long curved beaches and small rolling hills along the water make for a simply stunning coastline. After checking out the local lighthouse we went on a two hour dolphin watching cruise which included quite a few few dolphin sightings and a half hour to swim in the warm water to cool off on a hot day. I then split off from the group and went on a shore dive with a local SCUBA shop. After getting certified this fall in Roatan, I knew that I wanted to go diving again, and I knew I would have an opportunity to do so in Australia. I realized pretty quickly that I wouldn’t be able to make it to the Great Barrier Reef on this trip, so I asked around and heard that Nelson Bay was a great place to go for a dive. While the water was a bit murky, I had a blast underwater as we explored a sunken barge and got to see some rays, eels, and cuttlefish amongst others. Upon finishing the dive, cleaning the equipment, and changing into something a little less wet, I got back on the bus to Newcastle.

Just like that our weekend was over and we were back to work! The days were once again divided between two projects, one back in Glenrock, and one in a suburb of the city called Warabrook. At Glenrock we worked on a different side of the park, which was a little less picturesque and contained far more mosquitos. Our task was once again weed removal, this time with the goal of protecting the habitat for an endangered species of orchid. In Warabrook we headed to a small piece of public land nestled between a row of houses and a freight railroad. CVA had planted over 10,000 in this area about a year ago as a part of an Australian National movement to plant 20,000,000 trees across the country by 2020. It was pretty amazing to see how successful this planting has been, as almost 90% of the trees had survived and were flourishing. We worked mostly to remove the dead trees and plant new ones in their place, as well as watering nearly all of the trees to give them a boost of life in the dry summer. Our days at both locations were long and hot (temperatures reached over a 100 some days), but we got through them and made it back for our free afternoons.

Most of my free time this week was spent at the beach cooling off in the ocean, running, and cooking dinner with my Dutch and German housemates. One afternoon, however, I slipped away for a while on my own and headed over to the Fernleigh Track, an old coal mining railway that has been transformed into a biking and walking trail. The track is very different from the elevated trails in the states such as the Highline or the 606, but it is just as awesome. Surrounded by greenery and forest on both sides and broken up by a few old stone tunnels, the path is as entertaining as it is calming. As a huge fan of green spaces in urban areas, I quite enjoyed my miles on the track.

Well, that about takes me to now, as I sit here on the train bound for Sydney Central Station. It was a great couple of weeks in Newcastle, and I’m grateful for my time there. I appreciate my awesome team leaders Elise and Emily, and their hard work ensuring that we had the best experience possible. I appreciate my fellow volunteers, especially Amelie and Will, who I became quite close to over the past two weeks. I find it pretty incredible how quickly one can bond with complete strangers. The three of us made countless dinners from stir fry to spaghetti and meatballs to curry to roasted lamb. We had conversations about our respective countries, customs and politics. We sunbathed on beaches, pulled weeds, and watched movies. 14 days later and we are great friends, and we made lasting memories together that I hope to never forget. It was hard to say goodbye to them this afternoon, but as always I must keep looking forward and get excited for the next adventure! 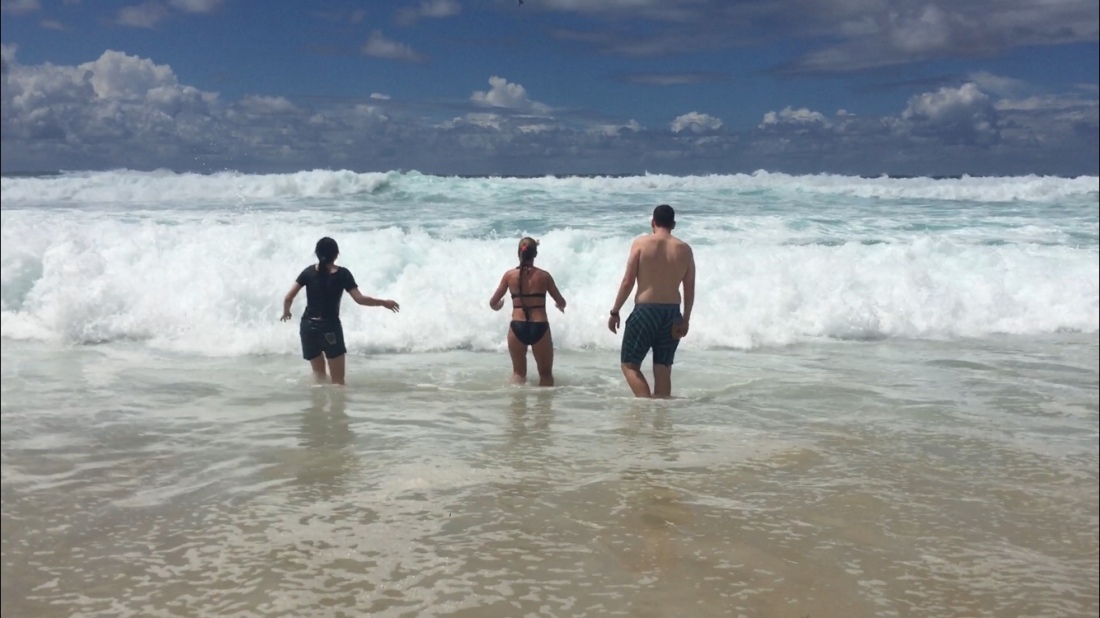