My third week in Australia is sure to be a memorable one. It was jammed full of activities, sight seeing, and conservation work, and not a minute was wasted. While I am a little worn out, I had a fantastic week and loved every second of it.

Once again I spent the weekdays volunteering with Conservation Volunteers of Australia in a couple different locations around Melbourne. The first of which was La Trobe Wildlife Sanctuary, a conservation area owned and maintained by La Trobe University, which bought the land from the government after an old hospital on the grounds closed. The sanctuary is over 30,000 Hectares, and contains various different native species of plants and animals. Our task was invasive species removal, and we spent our days weeding across the sanctuary mostly removing the thorny blackberry bush. It wasn’t necessarily the most exciting work but our surroundings were definitely special. Every once in a while, we would spot a kangaroo hopping around and Edward the emu did his best helping us out by eating all of the blackberries after we removed the plants. The sanctuary itself is absolutely beautiful. It appears to be a completely natural area full of old plants that have existed for hundreds of years, but there is lots of evidence of the former human inhabitance. A hundred years ago the land was occupied with cricket fields, tennis courts, and small buildings. After it was deserted the old plant species started to return and take their rightful place in the area. The result is natural wetlands and forest with an old car or tennis court post still hanging out around the sanctuary. CVA is working to assist the natural plants in reclaiming their grounds by planting native species and protecting the existing ones. 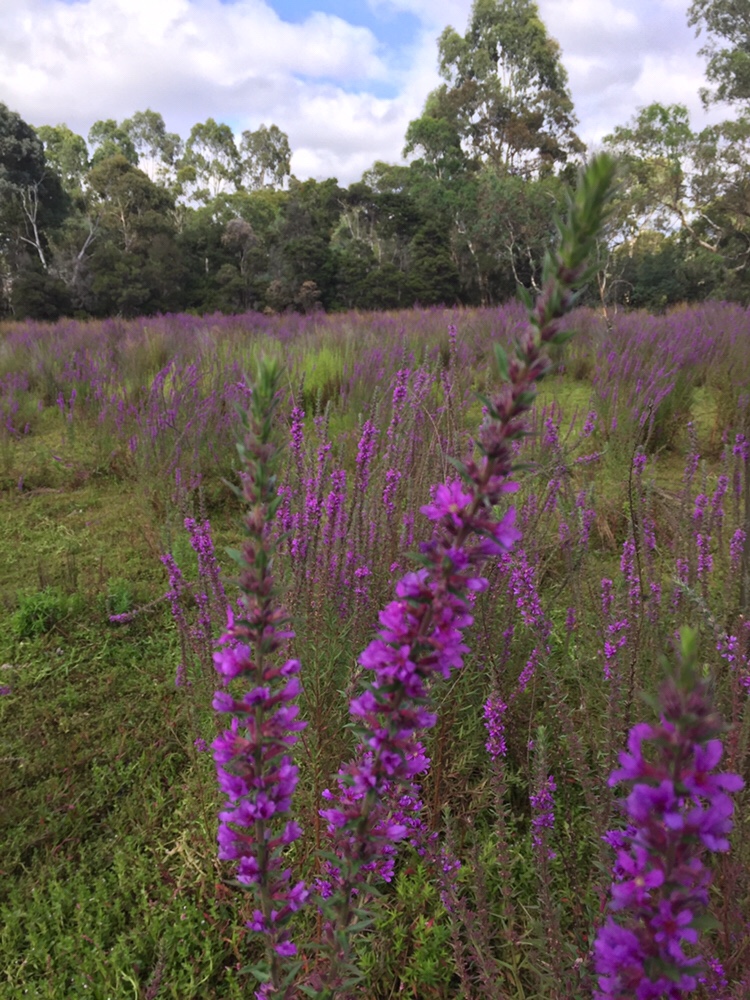 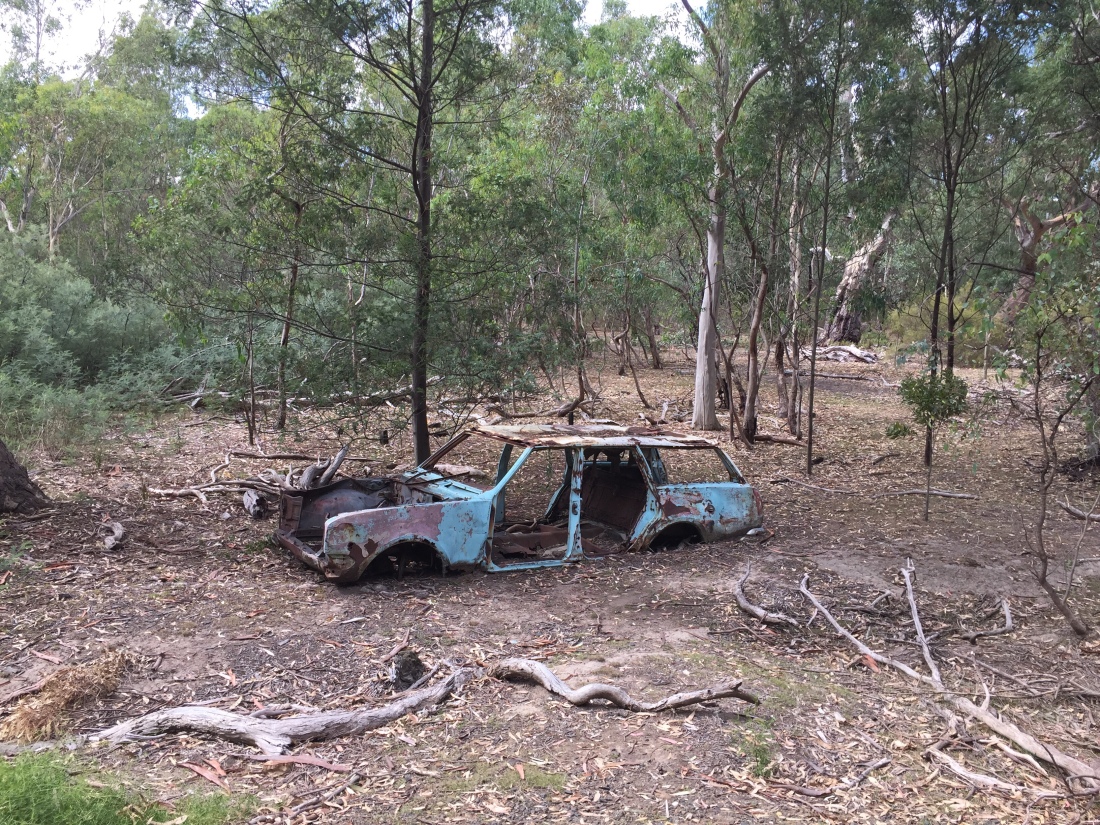 The other location was a CVA owned property about an hour outside the city that’s confusingly named “The Island.” The land was donated to CVA years ago and has since been a spot for thousands of tree plantings and general grounds maintenance. We helped out by walking through some of the former tree planting a and removing the tree guards from the plants that didn’t make it. 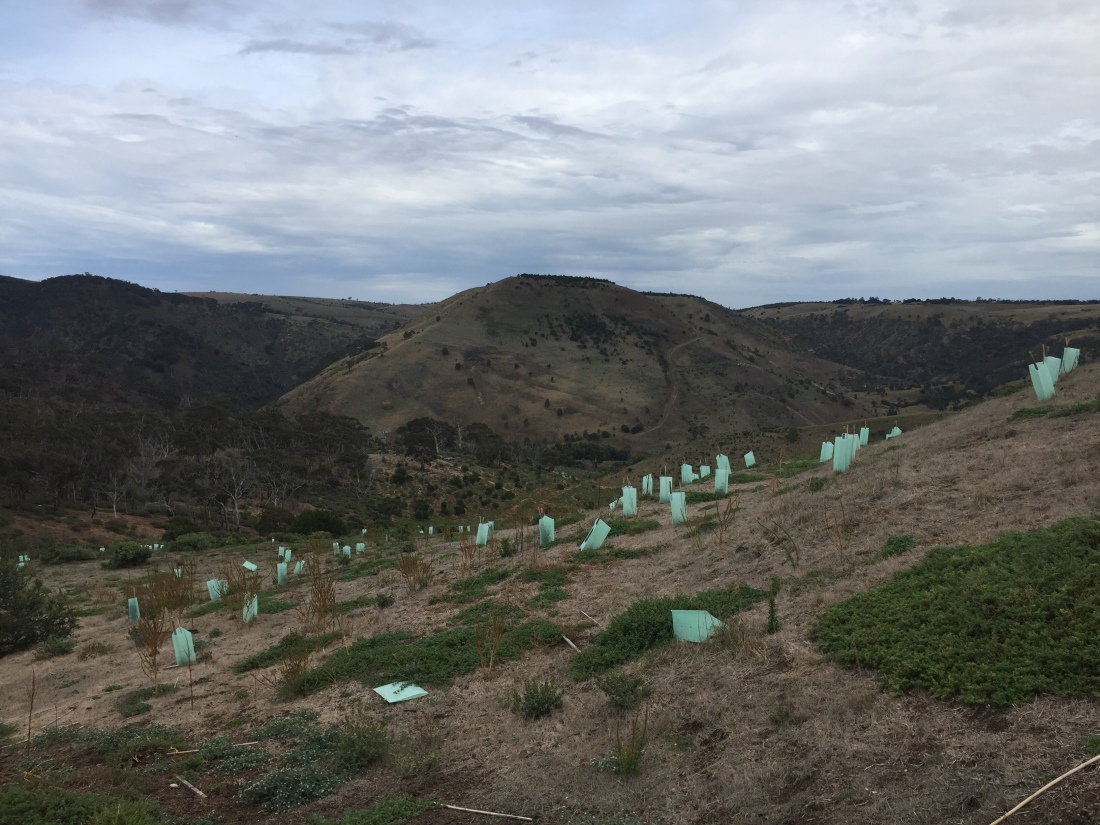 One of my biggest driving factors for getting to Melbourne was being able to reunite with my friend Kate from the fall semester with Carpe Diem. She is spending the spring working with a farm in the Yarra Valley just outside Melbourne as a part of her Latitudes Semester with Carpe Diem. After my 11 hour train ride from Sydney to Melbourne, I headed to Nomads Backpacker Hostel, and a few hours later Kate walked in. It was so nice to see her and reconnect as it had been two months since we last saw each other at the El Salvador Airport. We traded stories from our travels, talked about the trip, and had a great time. She was with her friend Ella, who also spent a semester with Carpe Diem this fall in India and is working on the farm with Kate. It was great to meet her and the three of us spent the weekend together checking out the city. We stopped in hip cafés, looked through vintage stores, and of course ate a lot of delicious food. Before I knew it our time was up, they were on their way back to the farm, and I was getting ready for another week of work. 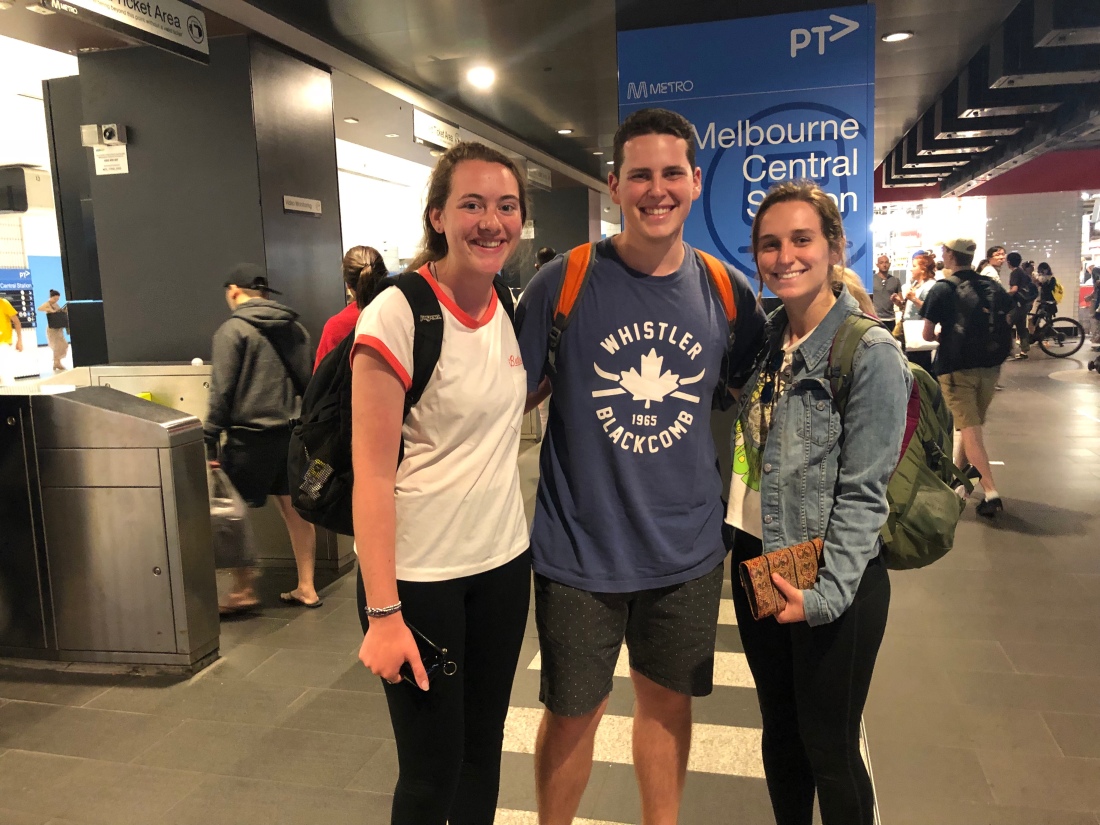 I was sad to say goodbye to Kate and Ella, but first thing Monday morning I was introduced to group of volunteers who I would be working with for the week. We had a group of nine, representing Spain, Germany, Japan, Switzerland, and the US. While everyone was very friendly and welcoming, I especially hit it off with the volunteer from Spain, Agnes. She and I only had three days together as she left early Thursday morning for a project in Tasmania, but we accomplished a lot in those few days. We had really interesting conversations (in Spanish and English) about politics, travel, social norms, and more. We unfortunately had to say goodbye but I hope it won’t be the last time I see her! 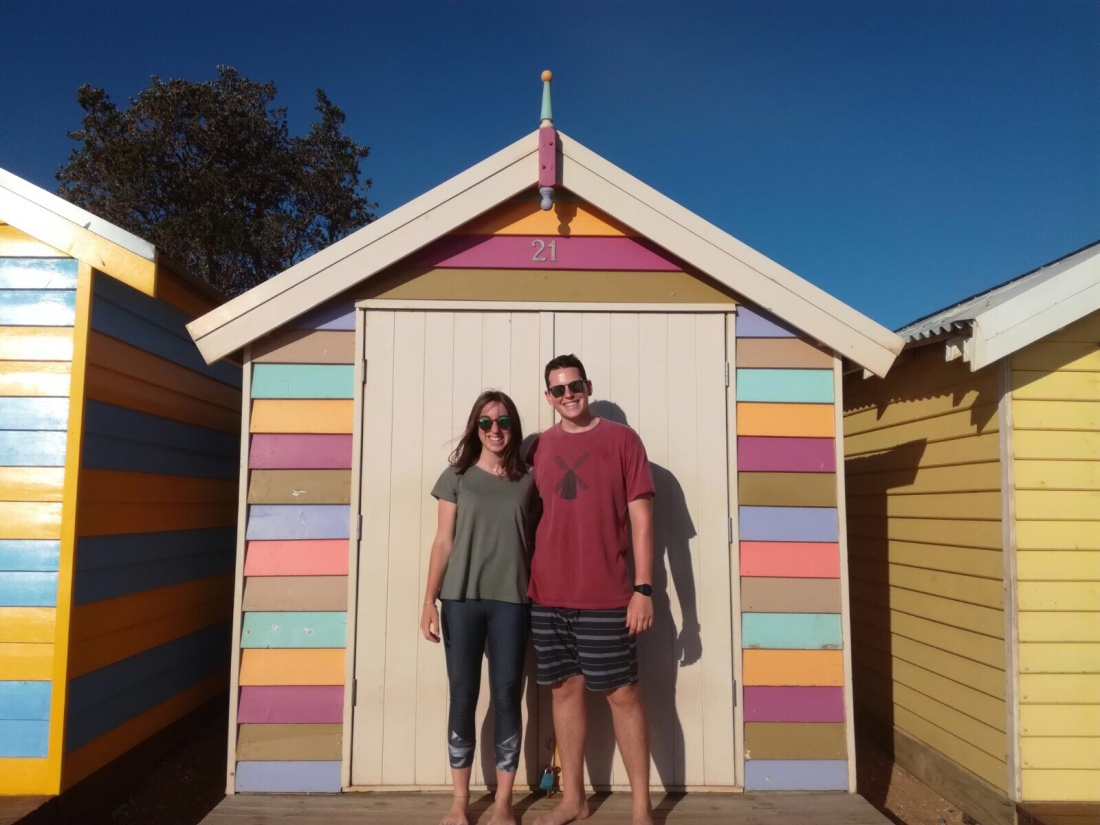 The first night I spent in Melbourne was no average night. It happened to be White Night, a citywide festival of art, music, and culture which fills the streets from 7 PM to 7 AM. We walked around with hundreds of thousands of others and admired the various installations around the CBD. 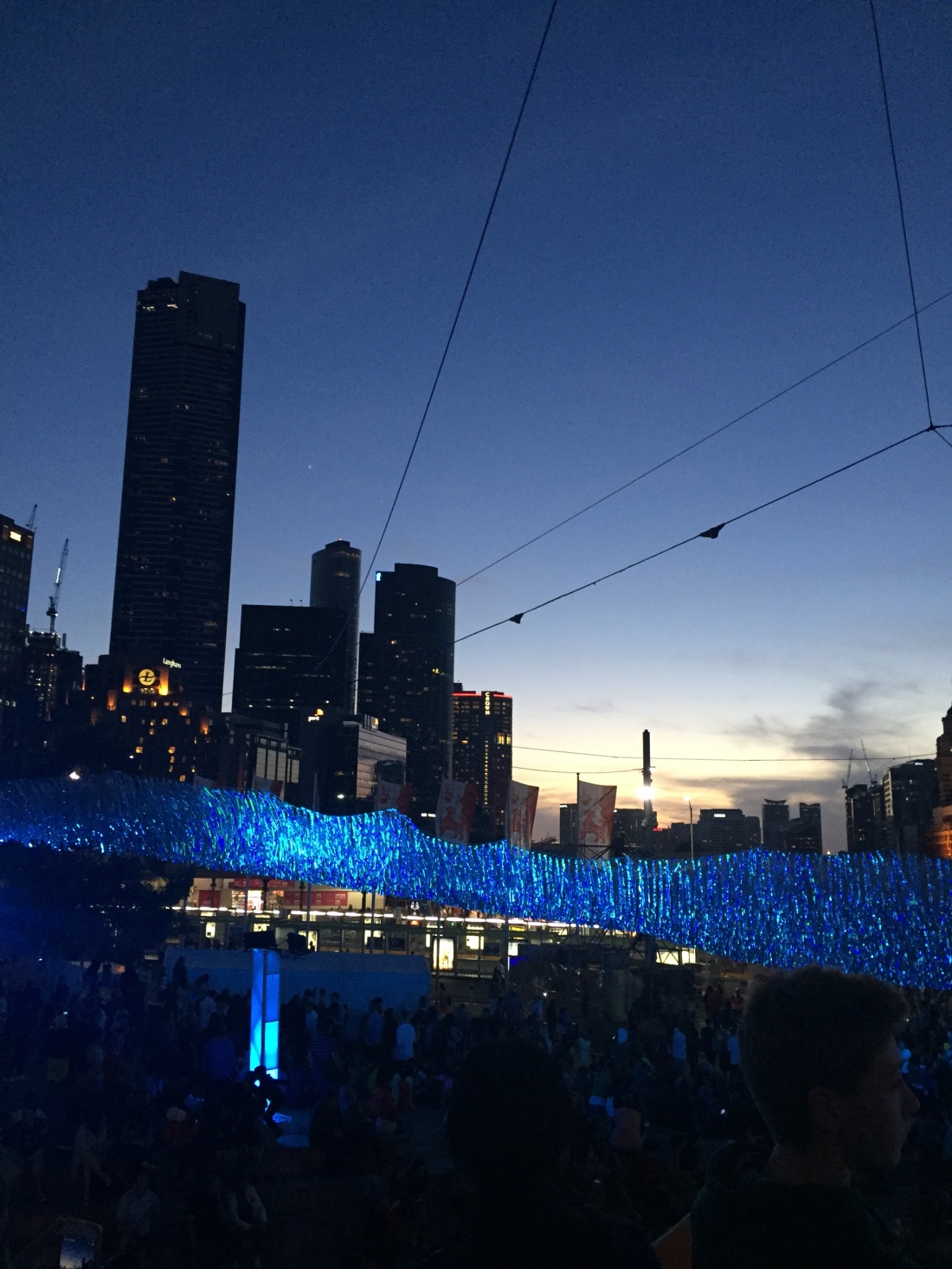 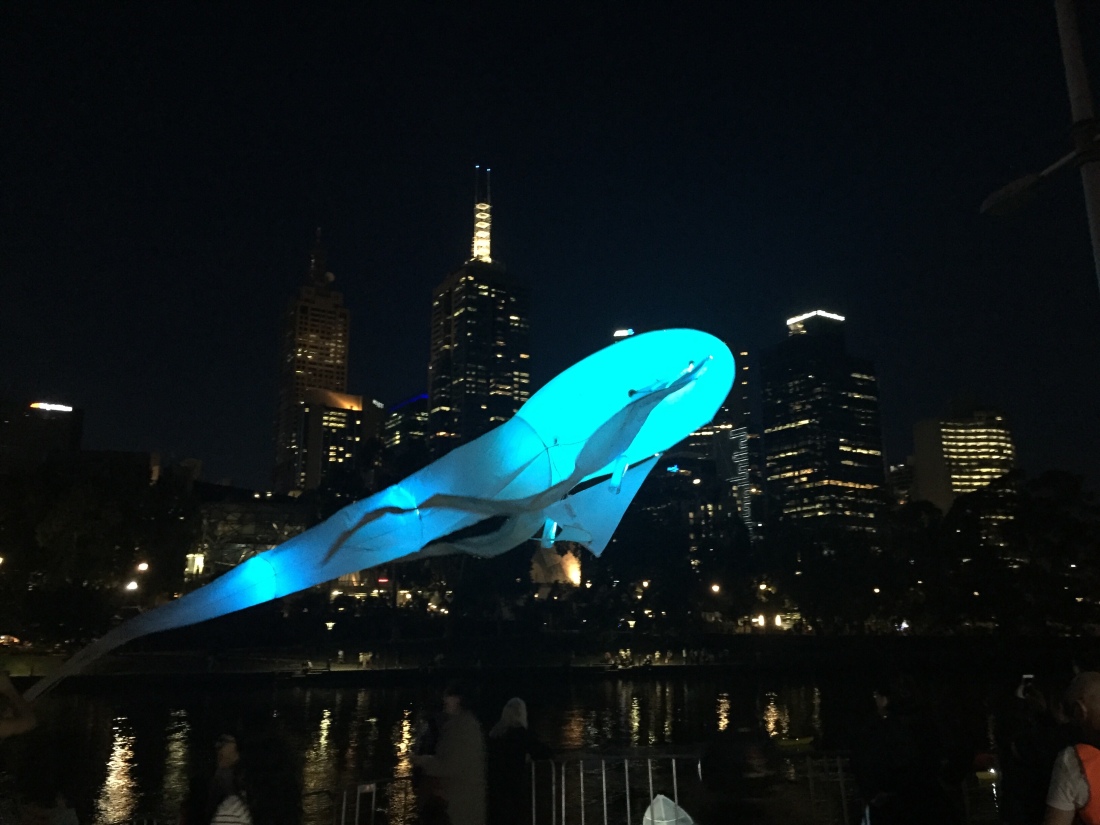 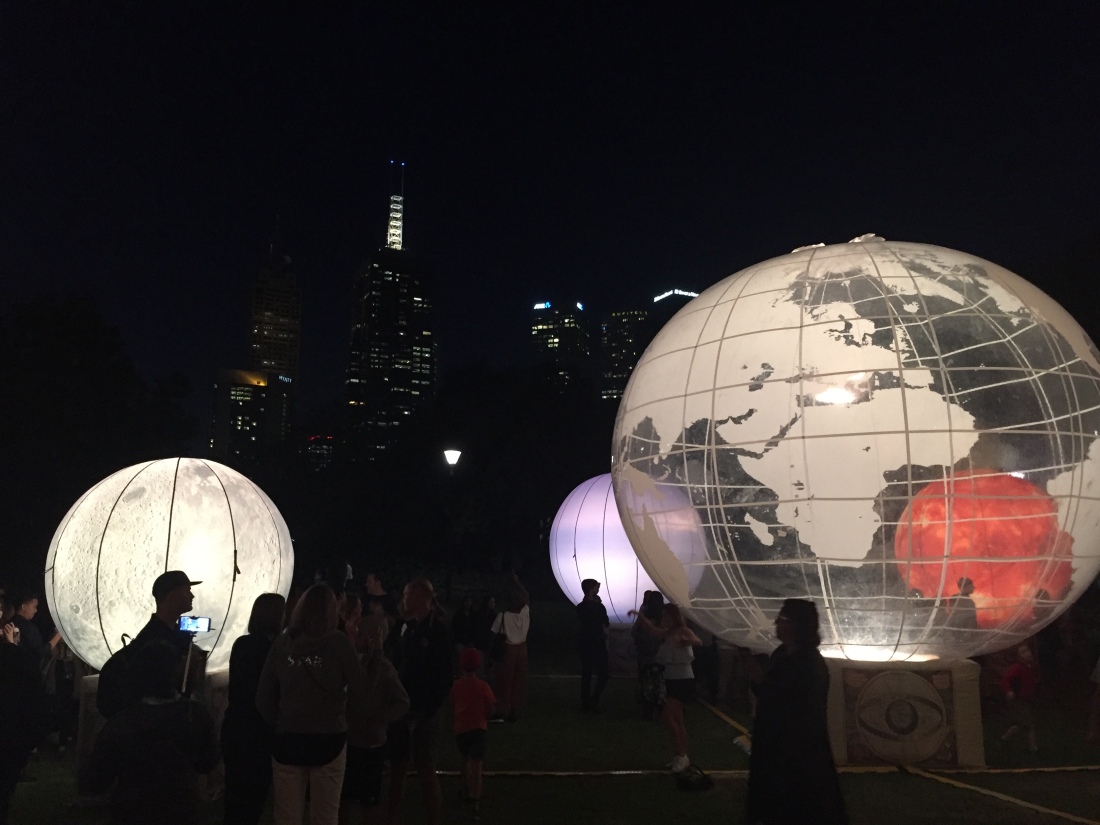 One afternoon, Agnes and I took the train down to Brighton Beach, a white sand beach about 45 minutes southeast of Melbourne. The shore is filled with small wooden bathhouses, all painted in vibrant colors. Aside from being a large tourist attraction for visitors like me hoping to take photos, the bathhouses store mostly surf gear and enable surfers to have access to their boards right on the water. 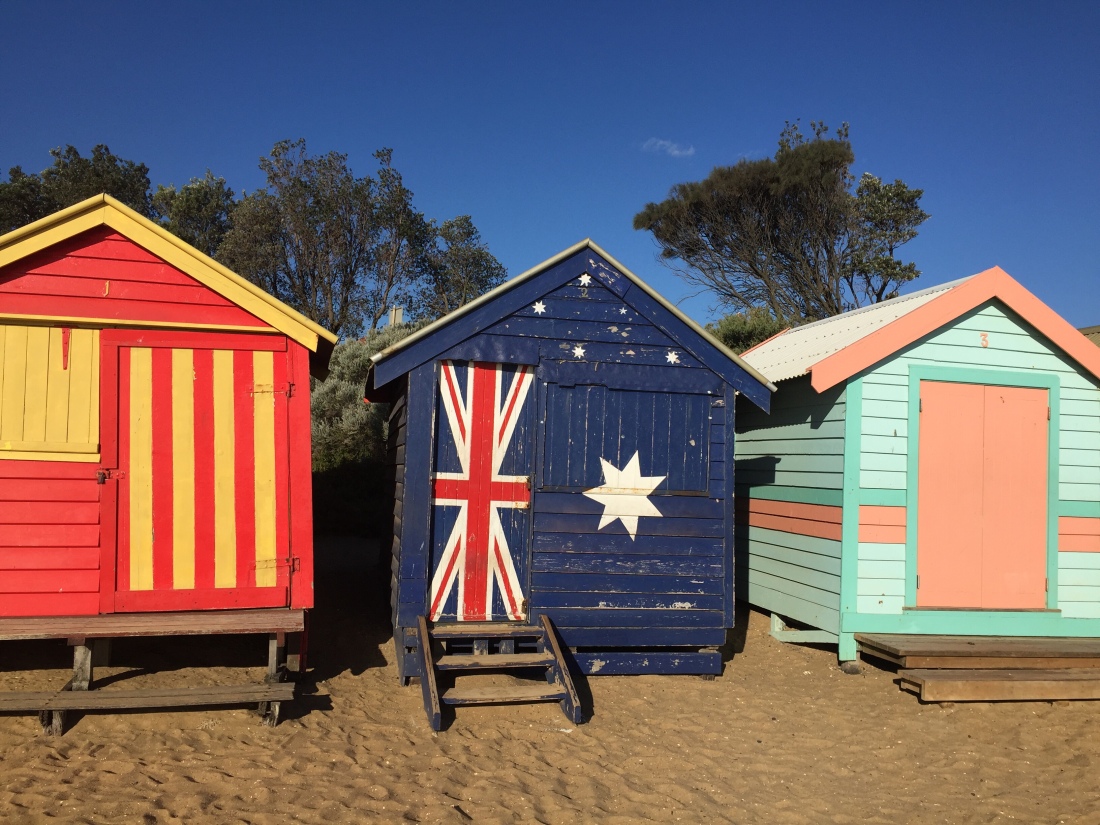 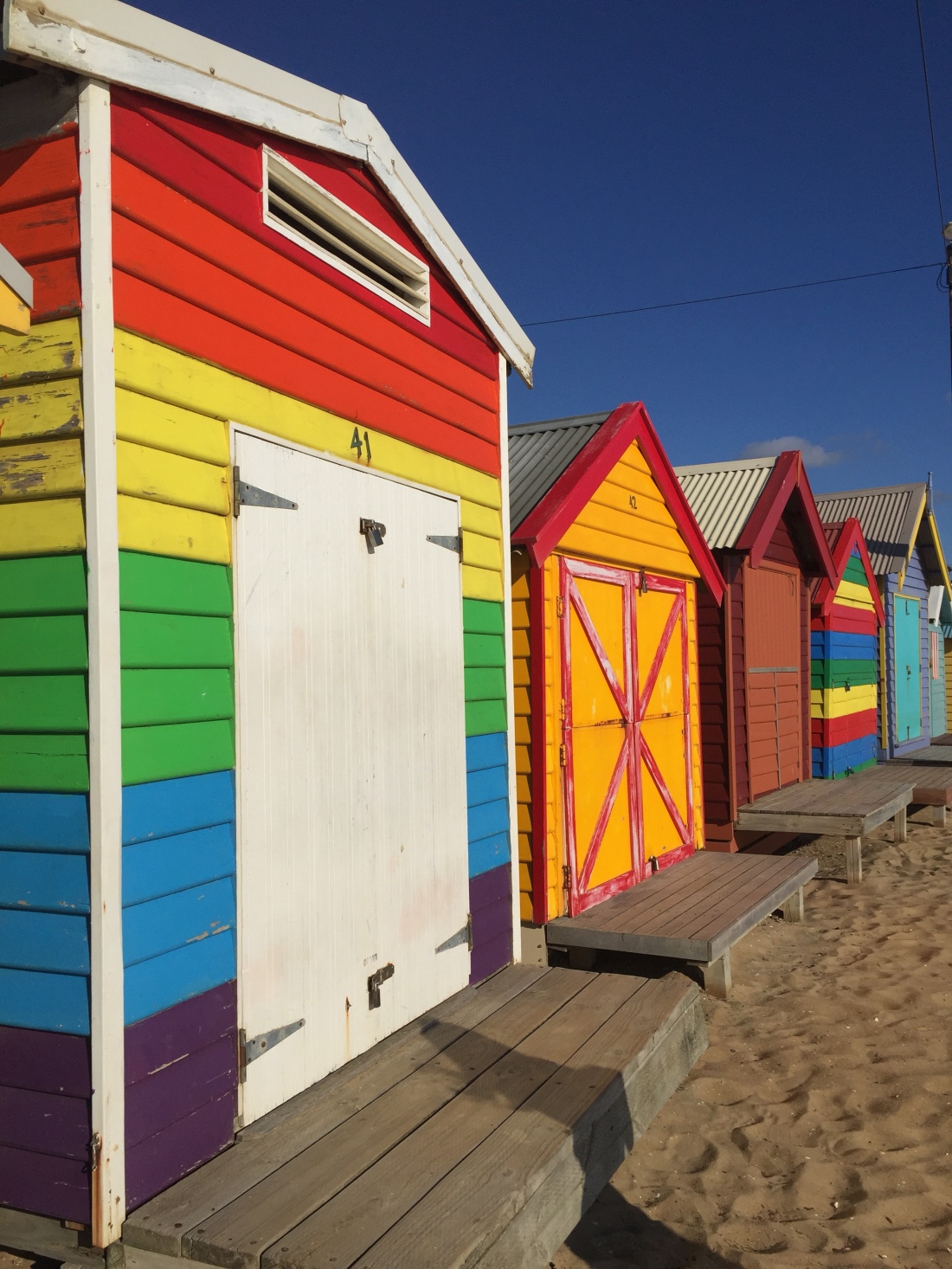 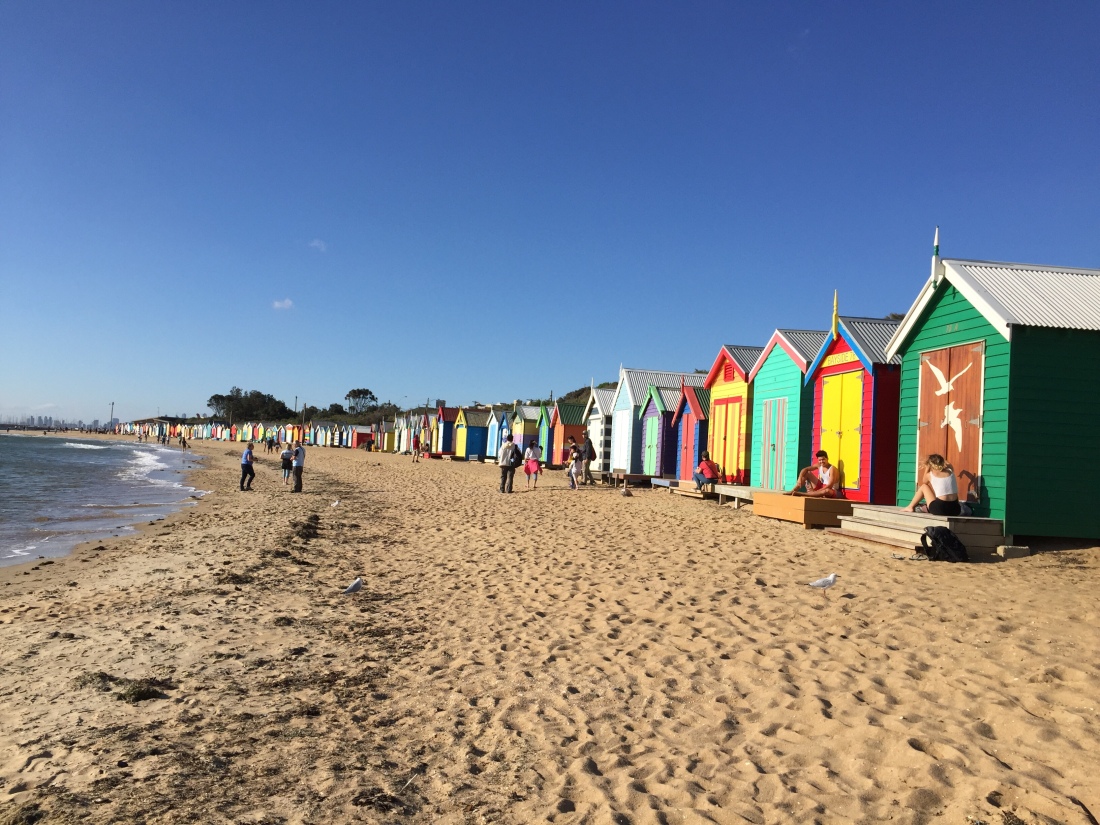 On Tuesday we were fortunate to have received the day off from work. So, Agnes, Robert (a volunteer from Germany), and I rented a car and made the two plus hour trip to Phillip Island. The small island connected to the mainland by a small bridge is filled with gorgeous beaches, incredible rock formations, Australian wildlife, and more. We went on a hike around the eastern side of the island, walked down the long beaches, checked out the Grand Prix circuit on the island, and marveled at the breathtaking sights. The day finished with the famous penguin parade, a nightly migration of penguins from the ocean to their homes just inland of the beach. It was a pretty incredible experience to watch hundreds of penguins come out of the water and waddle up the beach to burrow for the evening. Not only did we get to watch this process, but it happened as the sky changed from the warm hues of sunset to a blanket of stars glowing over us. I was pretty exhausted when we finally got back to the hostel just before 1:00 AM, but it was well worth it. 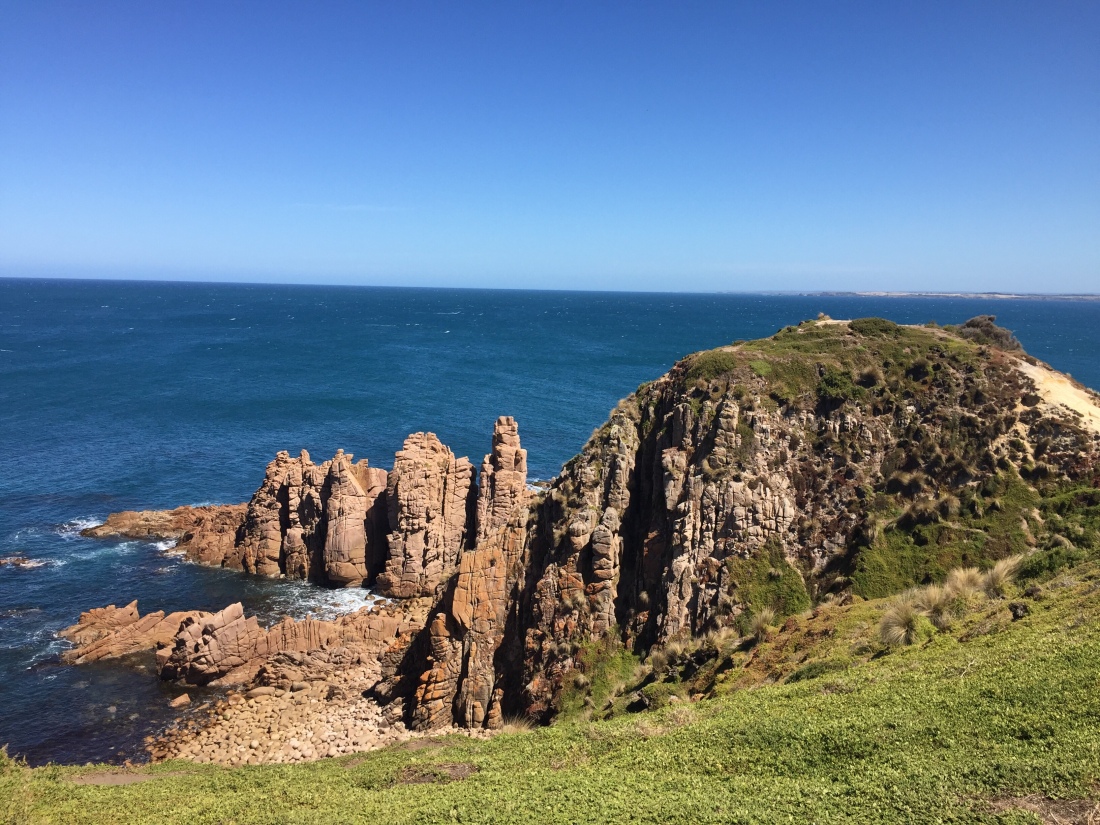 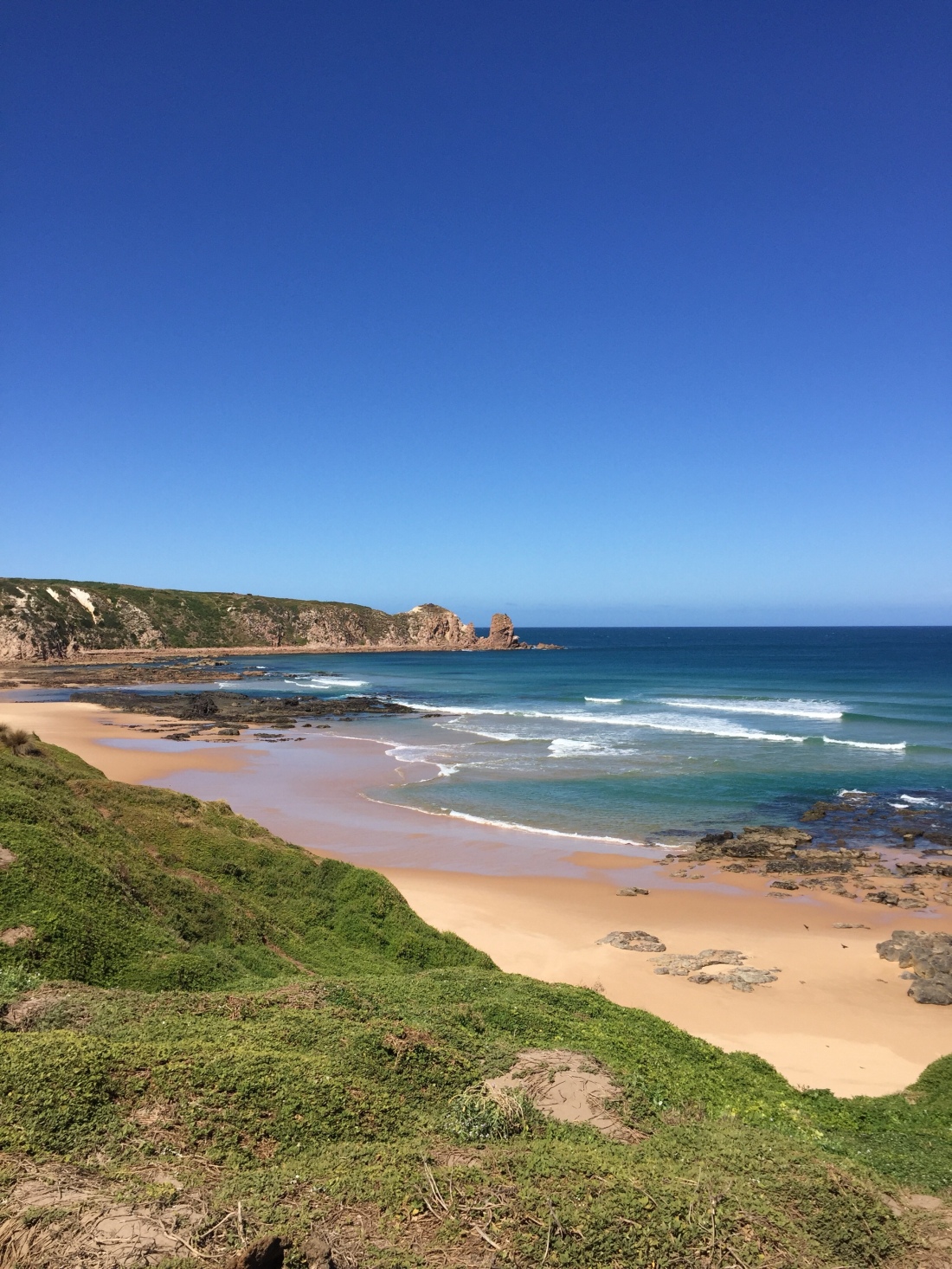 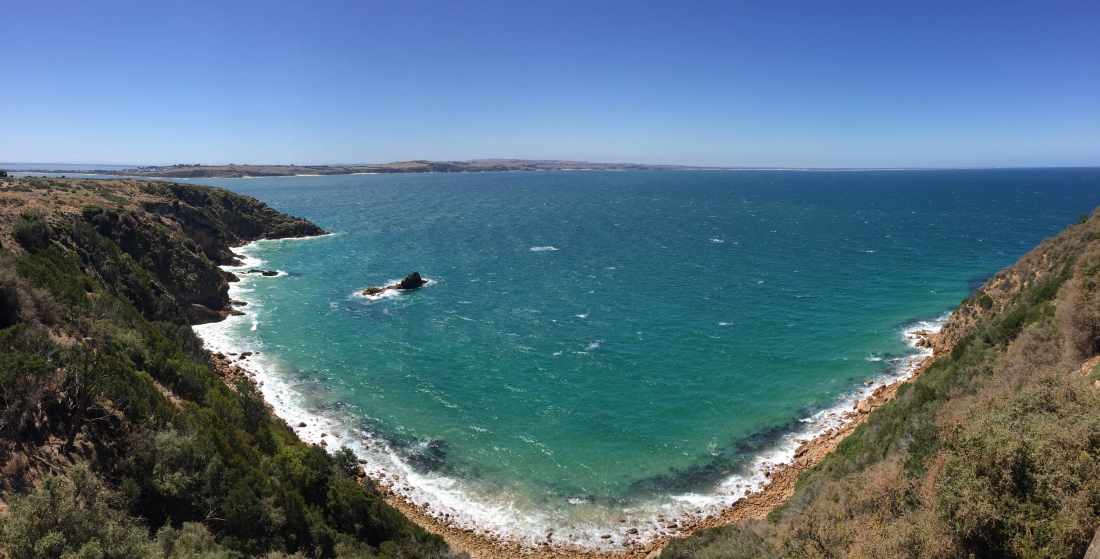 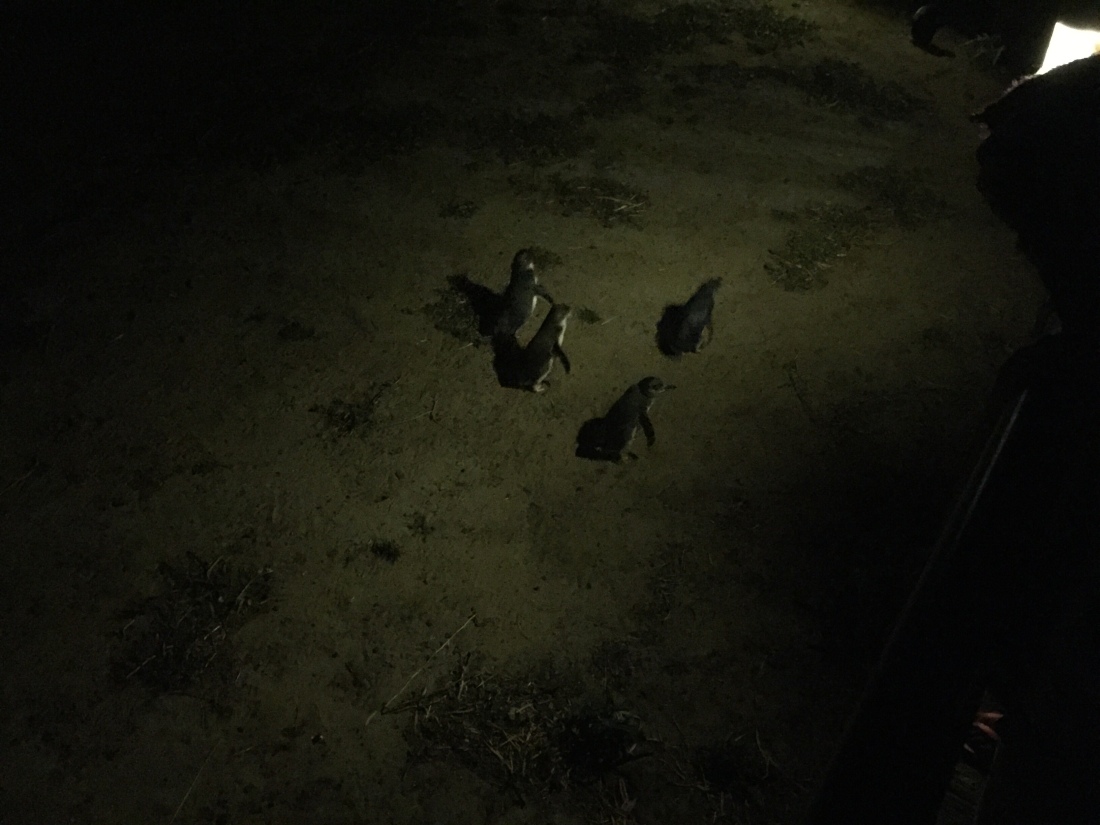 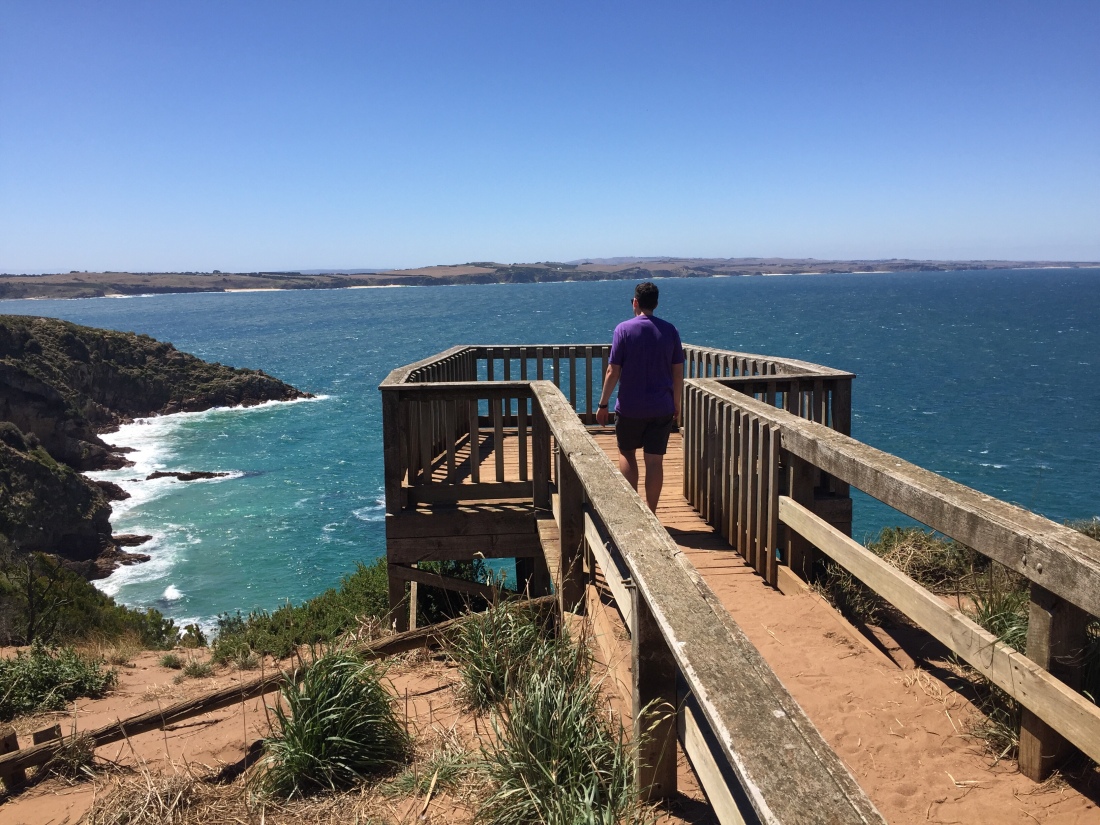 After work one evening I made my way down to St Kilda, a beach and town just outside the city. I enjoyed a lovely walk along the water and had a tasty piece of cake from one of the traditional cake shops on Acland St.

I somehow still found time this week to run, and one afternoon I made my way down to the Tan Track. While it was a little like dodgeball getting through all the people on the streets in order to actually make it to the track, once I did arrive, I had a fantastic run. The track, a cycling and running path nestled in between the Yarra River and Botanical Gardens, offers amazing views of some of the city’s skyscrapers and famed sports arenas. It was awesome to be able to see the city from that perspective while also having the beauty of the river and the gardens on my sides.

Melbourne has much to offer, and while I was only able to get a glimpse of the city this past week, I did my best to get around. In order to save me some time writing and you some time reading, here’s some of the other things I checked out: I saw some of the city’s famous street art along the lanes of the Central Business District. I walked through the old arcades and alleyways that connect pedestrians to hundreds of shops and restaurants in between the busy city streets. I visited the Eureka tower and got some sweet views of the city from the tallest observation deck in the Southern Hemisphere. I explored the many different stalls of the Queen Victoria Market filled with fresh produce, meat, souvenirs, and more. I admired Yayoi Kusama’s exhibition and other works at the National Gallery of Victoria. I enjoyed some quiet time in the reading room of the State Library of Victoria which features old wooden tables and green reading lights. 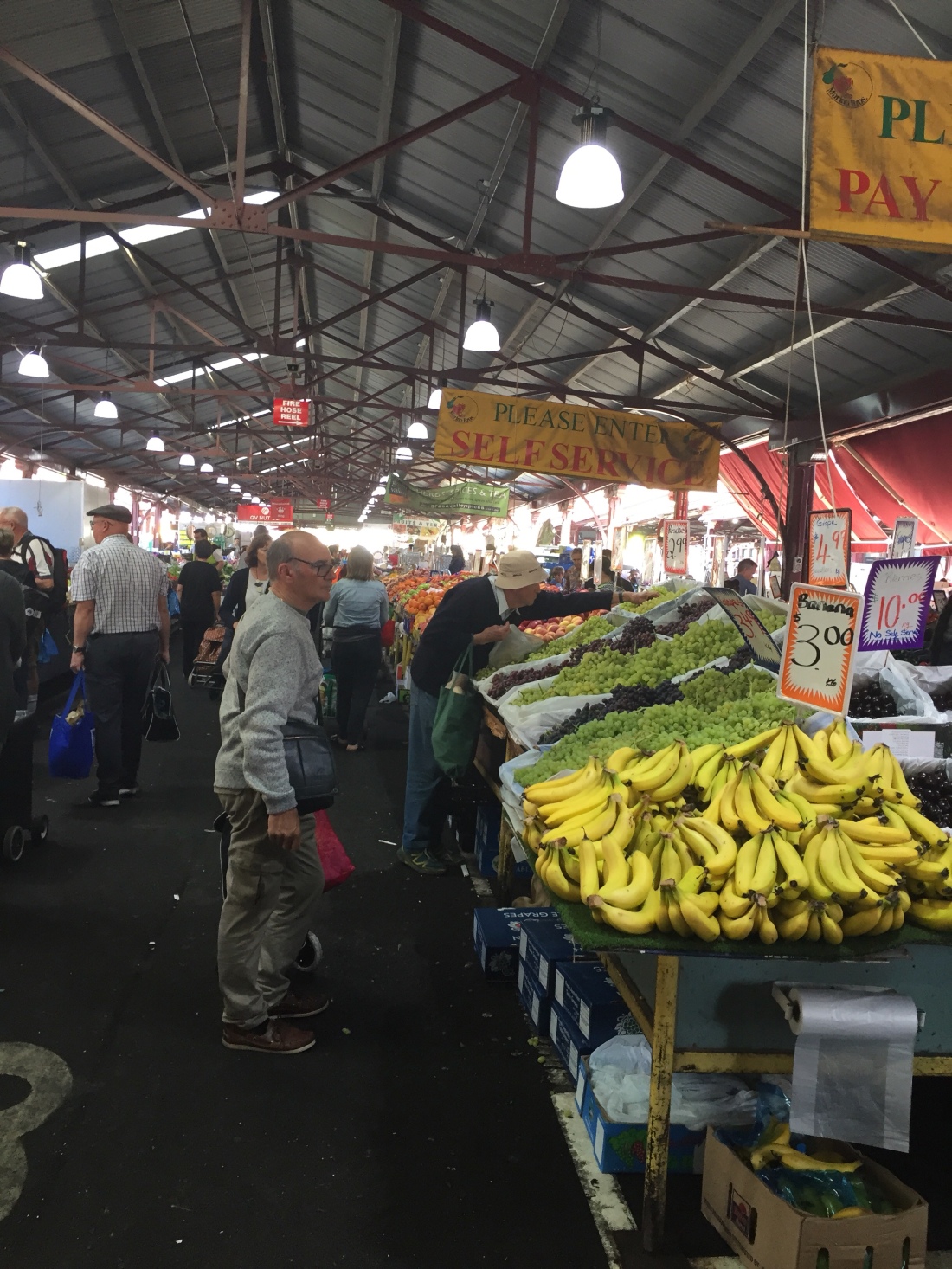 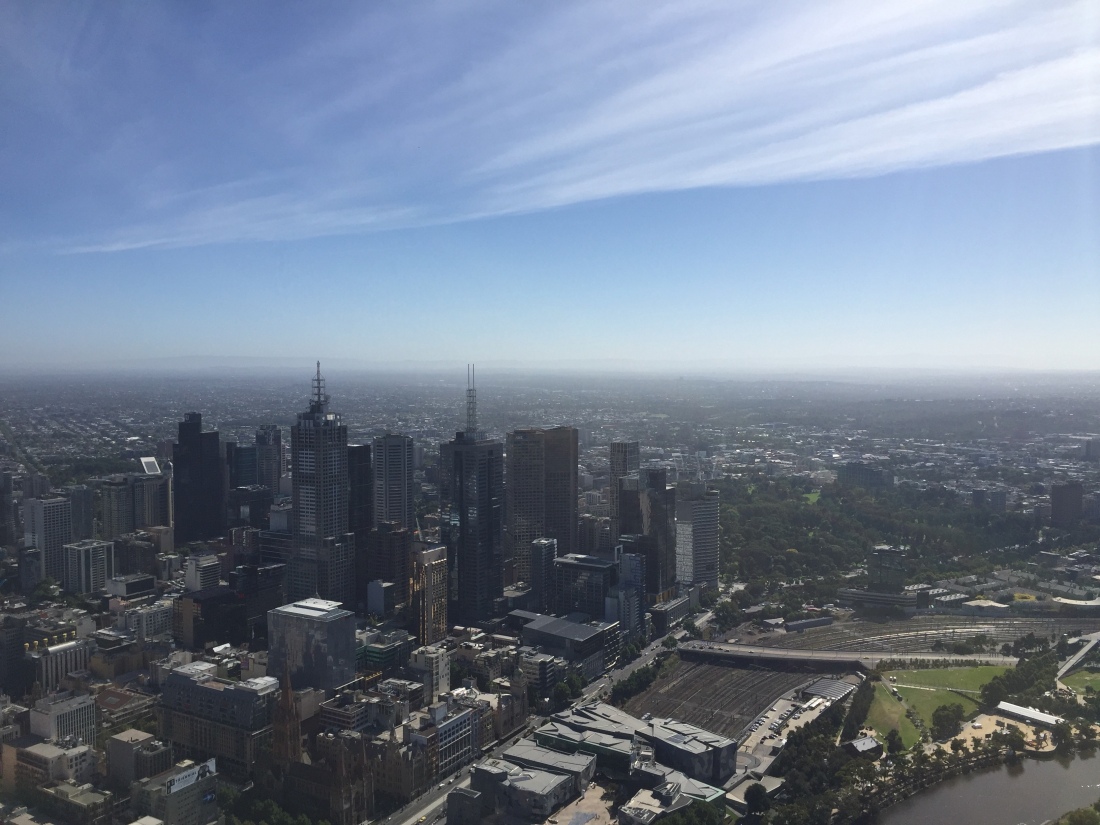 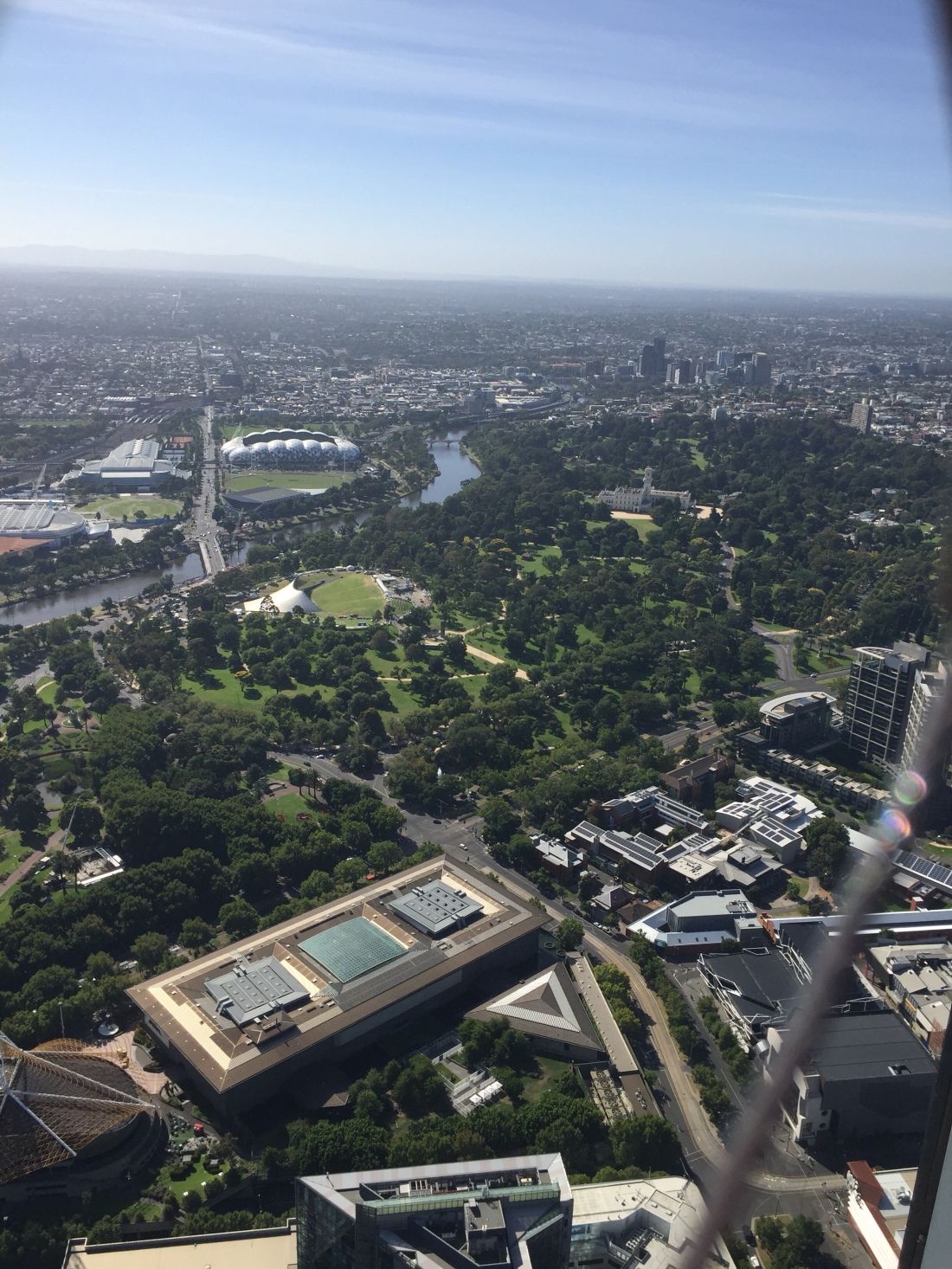 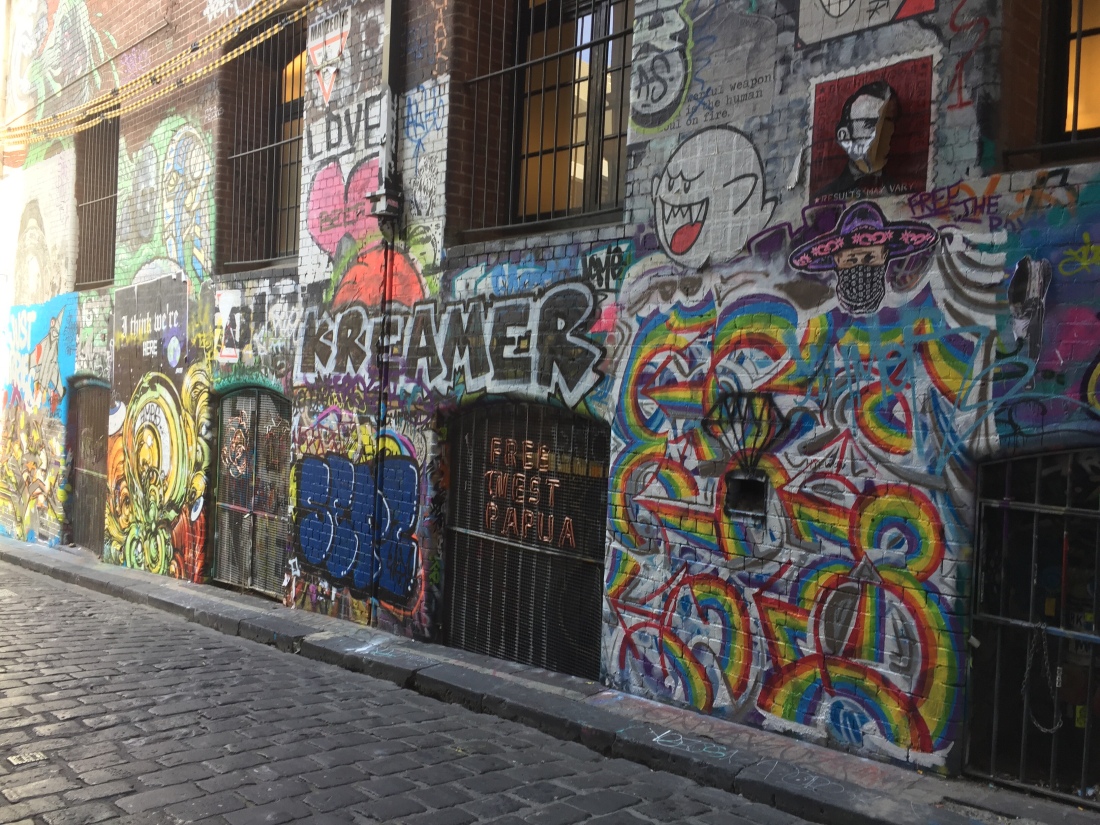 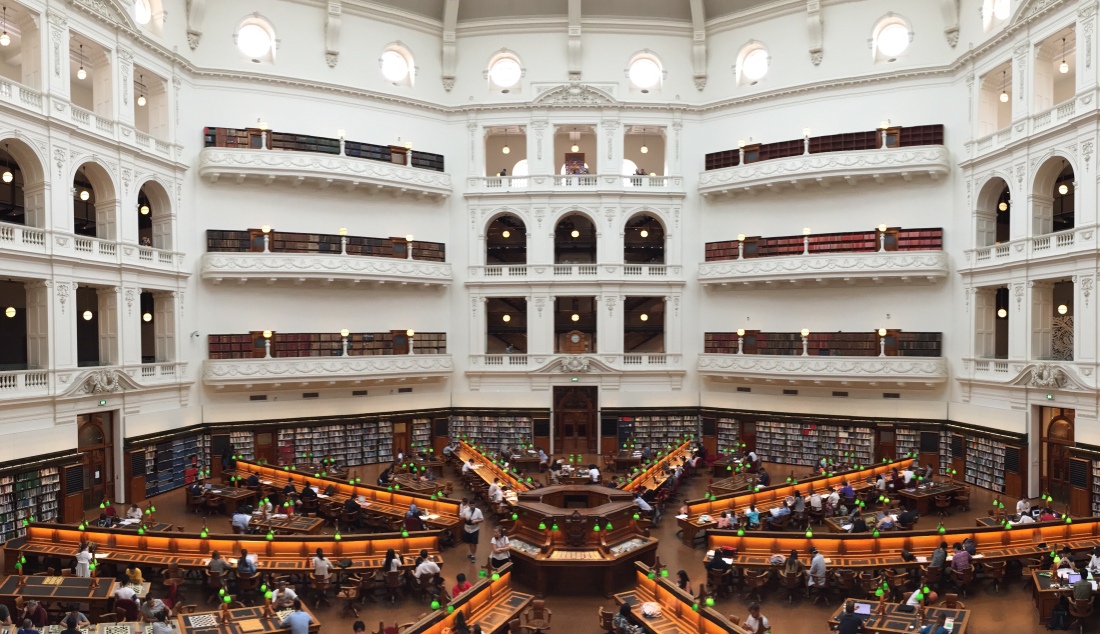