Pura Vida. These two words surround nearly everything in Costa Rica. It’s a valid response when someone is asked how it’s going, it is posted on billboards, street signs, and trucks, and it’s a lifestyle. The people of Costa Rica are some of the happiest in the world, so they must be doing something right. From the beautiful beaches to the thousands of square miles of land set aside as national parks, the country is full of natural wonders. Costa Rica also has a very strong connection with the United States, and their cities certainly resemble those of the states while also adding their own touch of Central America.

We spent just over a week in the country and while it was short lived, it was phenomenal. We stayed and volunteered with a local turtle conservation organization called Kuemar. We were living in a dorm like setting in the “Casa Tortuga” just a 5 minute walk uphill from the beaches we were patrolling. Since this area is relatively isolated, there are barely any people who live near the beaches, meaning that we had the beaches to ourselves with exception of the couple of local families and the occasional tourists.   Just a few hours after we settled in, on the night of arrival, we began our first turtle patrols of the week. There were three different time slots, 8 PM – 12 AM, 12 – 4 AM, and a highly coveted 5-7 AM shift. Each shift had two groups of three, one group that would patrol the closer beaches, Playa Onda and Playa Real, and the other would make the 30 minute trek to patrol Playa Nombre de Jesus. We would gear up in dark colored shirts as to not disturb the turtles, and we walked along the beach using only the light of the massive blanket of stars above us as our headlamps could scare the turtles away. It was a pretty incredible sight, even without the turtles, as the clarity and expanse of the Milky Way combined with the frequent shooting stars made it hard to look down. Unfortunately, we had to look for tracks in the sand, but fortunately, we would discover a track, look farther up the beach, and suddenly our eyes would fall upon a turtle, digging its nest in the sand, ready to lay its eggs. All in all, in my four nights of patrolling, I saw 10 turtles and three different species, 7 negra turtles, 2 Lora turtles, and 1 baula turtle. The baula was an especially amazing sight, as they are incredibly rare on the pacific side of the country, and the majority of our the organization staff who had been working for 4-5 years on those beaches had never seen one. Not only are they rare, but they are humongous as well, and the one we were able to see was about the size of me. After we saw a turtle, we would measure it, note other import data, collect its eggs, dig a nest (easier said than done) in a new, safer site where poachers and animals couldn’t get to them, and finally bury the eggs in the nest. While the nights were long and tiring, I couldn’t help but feel beyond lucky to be able interact so closely with such magnificent creatures. I was able to catch the eggs as the mother turtles released them, fluid from the process dripping on my arm. We were also able to see bioluminescence on the sand as the ground glowed in the form of our imprinted steps, in the ocean as the waves crashed into the shore, and even on the backs of the turtles as I rubbed their shells. Overall, I’d say the patrols were worth missing a few hours of sleep. Luckily, our days were very relaxing. Every morning was left completely open, meaning we could relax by the house, head down to the beach, or catch up on sleep. I was able to finish three books during those mornings and certainly kept myself entertained. In the afternoons, we would have a two hour activity with the organization, such as a beach cleanup, checking temperatures of nests, moving wood and more. After we finished I would usually go for a run before cooling off in the ocean as I enjoyed a beautiful sunset. After our time was complete, we piled back into a micro bus to Liberia, before taking public transportation to Alajuela, a town 5 hours away which hosts the San Jose airport. We spent the night in a beautiful hostel and the next morning we were off on a 5:30 AM flight to Roatan. It was strange to say goodbye to Costa Rica after just 8 days in the country, and although we got a taste of the pura vida lifestyle, it felt like we barely saw a crumb of the country. Despite this, we were all very excited to head to Roatan for a week of island relaxation and scuba diving.

We arrived on the Honduran Caribbean island just before noon. Roatan is a small tropical island located right on the Mesoamerican Barrier Reef, the second largest reef in the world. We were staying at our nicest accommodation of the trip, a hotel where we stayed in rooms of two, each fit with a back patio and view of the bay. Every day we would walk next door to the dive shop and work towards our PADI Open Water Certification. They were long days full of scuba videos, knowledge reviews, quizzes, a final exam, and confinement dives in a pool, but it was all worth it as the last three days were spent diving in the open water. We enjoyed unbelievable visibility, warm water temperature, and a vast array of aquatic life. We saw tons of different types of fish, coral sponges, etc. We saw eagle rays, green turtles, trumpetfish, barracudas, and angelfish. We were all thrilled to receive our certifications on the last day.

When we weren’t diving or listening to our amazing dive instructor, Chayanne, we spent most of our time eating and hanging out in the town of West End. It was extremely different from our previous destinations, mostly due to the different language and food prices. Instead of Spanish, the locals speak pigeon, a mix of Spanish, English, and island gibberish. In addition, we were used to paying 2 dollars for massive dinner, but due to the large tourism presence on the island, we were lucky to spend less than 10 on a meal. That being said, it was a fantastic way to end the trip, we did just that, as we piled in our last microbus, got on the plane to El Salvador, and then I said goodbye to the group and headed to Lima.

The three months I spent in Central America were unforgettable. Every step of our journey was one that I loved and will cherish forever. I am extremely thankful for the opportunities I was afforded on the trip, the ability to learn from so many different people about culture, religion, permaculture, sustainable development, conservation, geography, colonialism, and much more. I am so lucky to have made lifelong friends, to have experiences that will stay with me for the rest of my life, and to be able to travel the world. 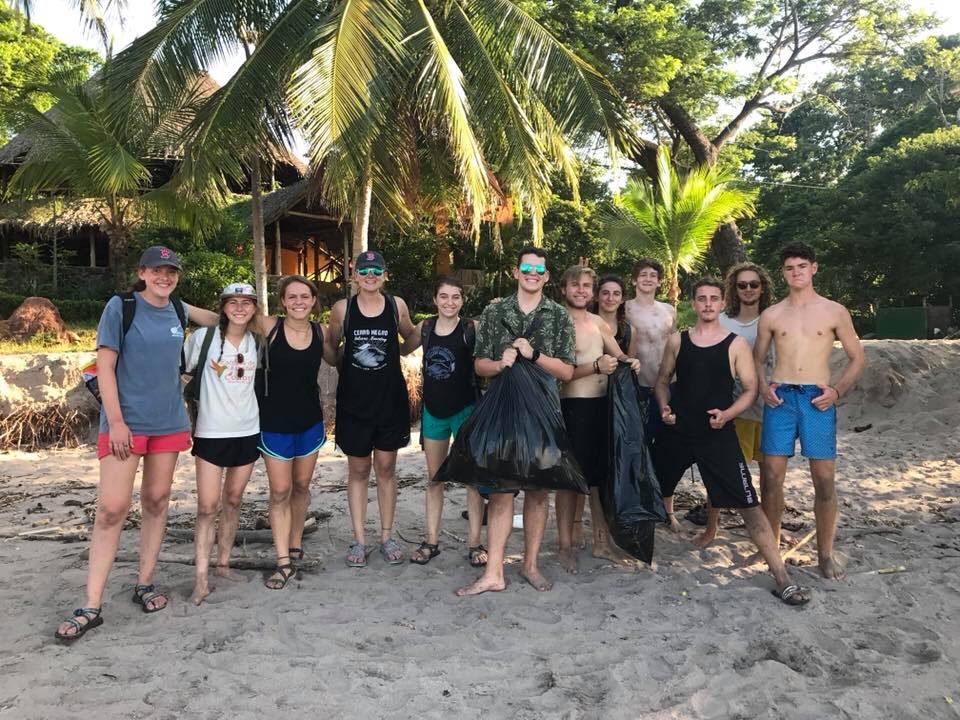 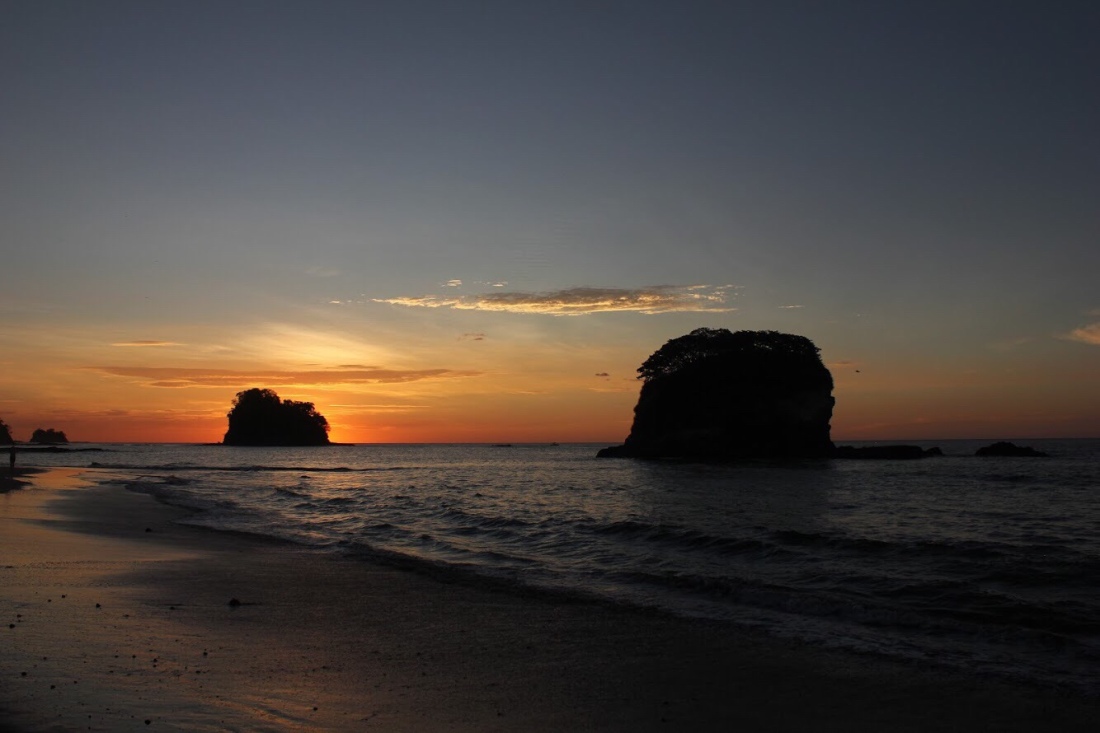